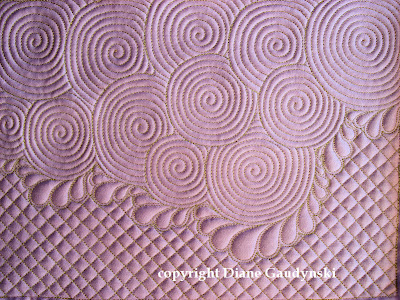 Border Design with Celtic Bubbles
Now that you have tried quilting this beautiful overlapping spiral design, I'll show you a few variations.  Above, an idea for a border includes filling a portion of the space first with a pile of Bubbles (interior of the quilt would be on top, or the other way round if you prefer, but I love having the grid go to the edge of the quilt to keep it stable for binding).  I then echoed the Bubbles once, and then added some small feathers.  Of course feathers could be larger, your decision.
Finally I filled the last of the space with a quarter-inch grid.  It isn't all that straight as I winged this sample, and marked those lines after the first part was quilted on a very poufy batt sandwich, so there are some interesting variations on "straight."
Tip:  Always mark any grids before layering the quilt, if you can.  Variations in spacing aren't nearly as noticeable in Diane-shiko or Apple Core, but straight line grids show everything.
When I finished the feathers and was deciding what to quilt in the remaining space, a grid popped into my head immediately as the perfect offset for all the curves and circles.  I like it.  It isn't that hard to do free motion, but it is marked, so that takes some time.  It is a wonderful visual contrast and contains the puff evenly.
Next, Oval Celtic Bubbles!  Usually I mention in classes that it is ok to quilt an oval if that's how your circles end up, so I decided to try an oval and see.  I used my class demo sample sandwich one more time, so there are "other things" included that I had done in class.  I squeezed in a small batch of oval Bubbles.
Oh my gosh, it is SO much easier than circles!  The shape is much the same of course, but not having to quilt out to the east and west on a home machine is so much better.  I could quilt ovals better and twice as fast.  Below is my only sample so far, but I hope to get you a really nice one soon. 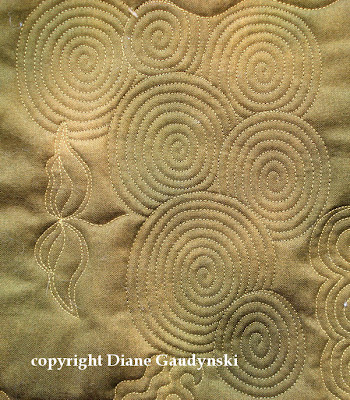 Oval Celtic Bubbles
More variations!  Next, for those of you who want some interesting variations, try some of the following, or come up with your own.  The first is a soft wood grain effect by doing overlapping ripply ovals.  The following samples made years ago for classes were folded and are a bit wrinkly. 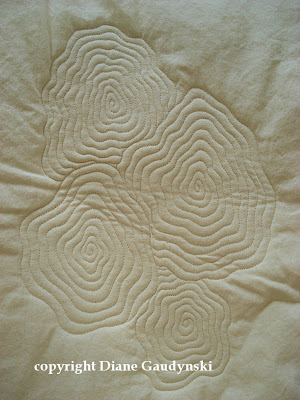 Next I used a chrysanthemum type ripple to create the following.  Note it is cut from a class demo sample..... 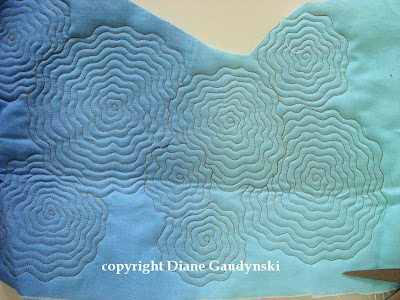 You can do rectangles or squares as well.  I'll try and get a sample soon for those, as my old one is too disreputable to post here.
Below is a portion of a small class example quilt where I added Celtic Bubbles in the upper corner, simply for visual interest.  I had other designs in this border but it all worked well together.  The entire border could have been Bubbles too, just another option. 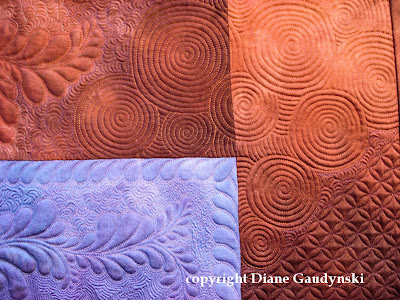 "Batz Below" detail
One function this design does very well is enclose excess puff between other designs and work it in with the curving arcs.  Before the area was quilted there were huge mountains of puff to be controlled.  Celtic Bubbles did the job.  I like to have these tools for function as well as visuals because every now and then it's necessary to solve problems while machine quilting by the correct design choice.
I also really held the quilt sandwich smooth and taut to control the puff while quilting this area, and slowed down.  I had the pressure lowered on the free motion foot as well so the foot didn't push along any excess. 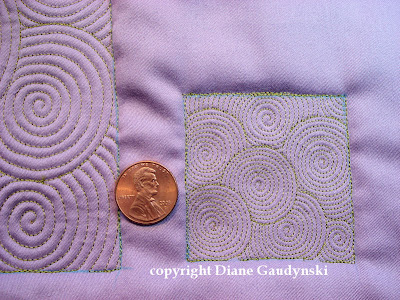 Another option for you is to do micro Celtic Bubbles, above, very tiny ones for close background fill.  I drew a two-inch square and filled it with tiny Bubbles.  They were actually easier than larger ones, but it is tempting to start whirling out into space from centrifugal force as you whiz around the circles as they become larger, so be careful.
Those of you who love to do this kind of quilting should be able to get some amazing results.  I definitely used my magnifier on the sewing machine for this.  I would use Micro Celtic Bubbles for small areas instead of another tight background fill.  However, acres of them, probably not.
If you are more a large scale quilter, try one of the "wonky" versions and space out to about 1/2" between rounds.  It will cover territory quickly and evenly.  I think it would look great too on children's quilts in areas where you don't know what to quilt.  Try heavier threads, fun threads and colors.
One thing I discovered - you get so much better the more of these you do.  I look at those first ones while I was quite rusty and wow, I can go twice as fast and the results are twice as nice.  It does happen. Enjoy your spirals and springtime eggs....
Diane
Posted by Diane Gaudynski at 8:39 AM

What a fantastic tutorial, goodness it's like a blog post class. Thanks for sharing such great info and photos. Your work is such a joy to look at.

Ive always enjoyed your posts but the last two days have been especially exciting. I can't wait to try some bubbles!

I really enjoy your posts. You are so willing to share your talent and ideas with us. Thank you for being so generous.

I tried your bubbles and they are amazing and quite easy to do. Thank you for sharing your telents.

Diane, yes! They are really visually interesting and they are not that difficult for most quilters. If you have never done echo quilting, that takes some practice to feel confident doing it.

I think the human brain "knows" this circle/spiral shape, the echo is the same throughout so you relax and don't worry about where you have to go, and as it unfolds it is very much fun to see.

Thanks everyone, give these a try. They are definitely worth some of your time, and I hope you love them.

Another great article. Love your post - thanks for taking the time to do it. When I was at Asilomar a couple of years ago I saw your class and had wished I had taken yours. You did a neat pattern and I'm not sure how to explain but it was like rotating triangles (I'm probably not explaining it right) but it had interesting movement.
LauraT

It's terrific to see your 2 recent tutorials! Thank you so much. I always learn a great deal from you. Your skills are incredible. You share little details that help us humble FMQers improve. To me you will always be the Queen of FMQ!
Humbly,
Joanna

I love the floral look of the wiggly variations!

Thanks so much for sharing these designs.

I wish it weren't so late already: I'd love to run to the studio and try this right now! But, of course, it's late and I've had grandchildren all day. Love 'em but I'm glad I'll have tomorrow to make bubbles. Thanks so much!
Mary

Wonderful tutorial Diane! Thank you for sharing your wonderful talent with us. You are a great inspiration!

It's been a long time since you posted. Sure hope everything's okay with you!

Diane, I apologize. My head knows Diane but my hands typed Diana. At any rate, it's wonderful you're back. I'm so sorry for your illness. 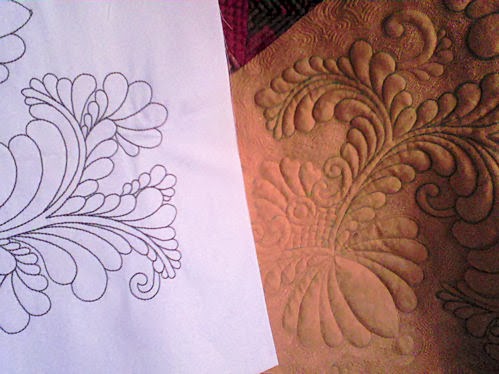 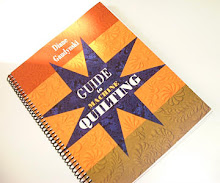